Although U.S. higher education has faced numerous crises and dilemmas in its history, the situation in which colleges and universities find themselves at the moment is indeed different. Shrinking public subsidies coupled with historic rises in tuitions come at the same time that colleges and universities have been tasked to dramatically increase the number of individuals with postsecondary degrees. Additionally, many of these students need financial aid, putting further strains on the higher education system. The stratification between rich and poor institutions in their access to resources is also growing. These conditions make the current "cost model" under which higher education has typically operated no longer sustainable and have led to college and university leaders examining alternative ways to deliver both high-quality and affordable higher education. These alternatives incorporate technology and include access to distance-delivered education and services, a focus on learners' outcomes rather than inputs, and technologically sophisticated buildings and classrooms.

The changes are welcome and largely overdue in much of higher education, but unless the use of technology, whether in instruction or in the operation of the institution, is guided by an understanding of higher education costs and cost structures, its use will not fix the problem of a broken higher education cost model. This problem is not confined to the way that instruction is funded and delivered; rather, it is much broader, including the costs of academic and administrative overhead and the largely unexamined "fixed costs" that drive so much of institutional spending. To implement technological innovations that can improve both efficiency and effectiveness, leaders must be guided in their efforts by a strong understanding of the impact of the innovations on both costs and revenues, as well as on learning outcomes. Without this understanding, leaders are likely to follow the usual model of innovation in higher education: implementing program add-ons, which are sometimes successful and sometimes not but which inevitably increase costs rather than replacing or reducing them and ultimately fail to take hold in ways that will leverage systemic improvements.

A New Focus on Spending

Getting a better handle on college costs requires a new focus on institutional spending, buttressed by analytics that allow institutions to look at spending in relation to outcomes (not just inputs) and that permit them to benchmark costs by examining spending patterns over time and in comparison to peers. Doing so, however, is easier said than done. The higher education "industry" has long overlooked the spending side of the college cost equation. Analyses of institutional finances have historically been dominated by a focus on revenues and institutional financial conditions (such as year-end financial statements or audits), on student tuition and financial aid, and on the broader concerns around college affordability. Such an emphasis conflates spending with revenues, which is a mistake, since many sources of revenue are not available for general fund purposes. Moreover, the focus on revenues also means that relatively little attention has been paid to what institutions do with the revenue and what proportions they spend on faculty salaries or employee benefits or student services or admissions or anything else. It is important not only to refocus attention on college spending but also to understand the constituent elements of costs on both a per-student and a per-degree basis, since that is the only way to determine whether alternative investments are cost-effective.

Insights from the Delta Cost Project

To help shift the higher education finance discussion to college spending, since 2007 the Delta Cost Project has developed data and metrics focused on spending in public and non-profit higher education institutions. Working with existing data reported by institutions to the federal government—primarily data from the annual Integrated Postsecondary Education Data System (IPEDS) survey—the project has harmonized and standardized the data as much as possible in order to account for revisions in accounting standards and IPEDS reporting formats. These adjustments allow the analysis of changes over time and the benchmarking of costs among different types of institutions. The project also has developed a number of metrics to focus on different types of spending—for example, not only the spending associated with the direct educational mission of colleges and universities but also the spending on research, public service, and auxiliaries. Even at the aggregate national level, the Delta Cost Project measures rebut some commonly held assumptions about college finances, in ways that should be instructive for efforts to improve efficiencies through technology. The project findings yield insights into spending rates, cost areas, cost per student, and cost per degree. 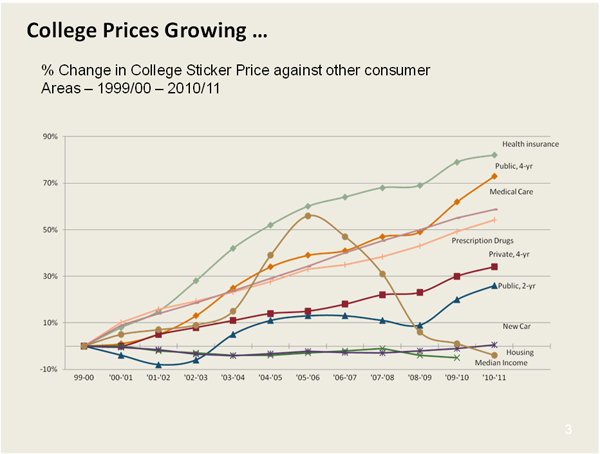 Figure 1: Changes in College Sticker Price against Other Consumer Areas, 1999–2011

The Delta Cost Project data and analytics are only scratching the surface of the types of information needed so that higher education can reduce unnecessary spending and put increasingly limited resources into areas that pay off in quality. More granular data about costs will help educators and policy-makers learn more about efficiencies and determine how technology might best be leveraged to increase both opportunities and effectiveness. No one has the time or the need to immerse themselves in elegant analytics that ultimately do not produce actionable data. Future efforts to refine cost analysis in higher education need to be guided by a highly focused agenda that will get at the most critical cost drivers to help both institutional and policy leaders make better decisions about spending and ultimately to connect spending to performance, including quality.

Metrics on Costs by Discipline, Level of Instruction, and Enrollment Status

Although the IPEDS data from which the Delta Cost Project database is built does not provide information on spending by individual discipline, level of instruction, or enrollment status (full-time or part-time), individual institutions and state policy-makers need cost information at these levels to determine both where their money is coming from and where it is being spent. Educating students in certain fields (e.g., some of the sciences, which require extensive lab work and equipment) costs more than educating students in other fields (e.g., the humanities). In addition, graduate and professional courses are typically smaller in size than many undergraduate courses and generally require more senior faculty to teach, thus making them more expensive to offer. And although assumptions are usually made about the costs of educating part-time students, who now account for 38 percent of all enrollments in higher education,8 these students are most likely to enroll in community colleges and typically arrive with a number of educational and social needs that must be addressed if they are to succeed. Understanding all of these costs at a more granular level is necessary for leaders to make decisions that can both cut costs and help students obtain degrees.

Metrics on Costs per Unit of Student Service

The current push to produce more college graduates—coupled with the fact that many students entering higher education are not prepared for college-level work—has resulted in the need for a range of student services. Some research has shown that the use of various student services can improve persistence, graduation rates, and transfers from two-year to four-year colleges, but not enough is known about what the individual services actually cost to provide and, more important, about which services are most effective.

A common assumption in higher education is that some of the biggest savings from technology will occur in facilities costs. Yet the relationship between technology and facilities costs may not be as straightforward as it initially appears. Online courses obviously mean less use of and less wear-and-tear on buildings, but there are a number of other factors to consider. The recent recession and deep cuts in state appropriations to public higher education have resulted in significant deferred maintenance to existing buildings on college campuses. Sightlines has indicated that nearly 25 percent of public university space will be over fifty years old by 2020.9 Buildings of this age that have not been renovated are at a high risk of failures in mechanical systems (e.g., HVAC and electrical) and of general deterioration of usable space. In addition, although many in higher education assume that the newer, high-tech buildings and classrooms need less attention than older buildings, the opposite is more often the case. The technical complexity of these newer buildings necessitates regular maintenance and upkeep by skilled technicians; if this upkeep is ignored, costly repairs can be required.

Another common assumption is that the wise use of technology will save money in higher education by providing a range of services, including instruction, more efficiently. Almost one-third of all students in higher education have taken at least one online course, and about two-thirds of academic leaders believe that students' learning in online courses is similar to or even better than their learning in face-to-face classes.10 We know less, however, about what types of students are most likely to benefit and what types of courses are most successfully offered as online courses. And with the widespread use of adjunct faculty and graduate assistants to teach lower-level courses, per-student instructional costs for online courses will likely not be that much lower than the already low unit costs for these entry-level general-education courses. Technology is also being used to provide some student services, but we know very little about their effectiveness and if they indeed save money. As institutional leaders think about refining metrics on costs by discipline, level of instruction, enrollment status, and student services, they need to understand where technology fits in, where technology works and does not work, and where technology can save money.

The Delta Cost Project has drawn attention to the need for a new focus on institutional spending and has provided a number of useful metrics for thinking about how different types of institutions spend money, about the relationships between costs and revenues, and about the declining public subsidies in public higher education. However, the Delta Cost Project data is just a starting point for policy-makers and decision-makers. We have suggested areas in which additional data is needed, particularly at the institutional and state levels, but the most important point is that budget and spending decisions need to be based on data, not on rumor or public opinion or perceived impact. In an Inside Higher Ed survey of college and university business officers in 2011, only 39 percent of the respondents indicated that their institution was effective in "using financial data to aid and inform campus decision-making."11 Better data is clearly needed. But even more important, better use of data is mandatory if higher education is going to fix its current, broken cost model.

© 2012 Rita Kirshstein and Jane Wellman. The text of this article is licensed under the Creative Commons Attribution 3.0 Unported License.