Although the Internet has become an essential tool in education, the World Wide Web is not a global phenomenon — many students in the developing world have little to no access to it. When they do access the Internet, download speeds can be painfully slow because of limited infrastructure in their home countries. To address this problem of access to information, hundreds of colleges and universities in underserved areas have adopted off-line libraries that store millions of digital educational resources for instructors and students.

For the privileged one-third of the world's population, the Internet seems always ready to answer any question about any subject. Students discuss class materials online, upload homework to professors, download videos and audio, and interact in real time with their colleagues and collaborators. The Internet has undoubtedly transformed learning for students in technologically advanced countries and made research and discovery an easier and cheaper task.

Reliable and speedy Internet subscriptions in less developed nations can cost universities hundreds of thousands of dollars a year — well beyond the budgets of most such educational institutions. With an entire campus sharing a tiny connection, PDF files, large pictures, videos, and other bandwidth-eating files can take hours, sometimes days, to download. Combined with the scarcity of electricity — in many areas outages are a daily occurrence — working with Internet resources becomes next to impossible. This situation has put students in the developing world many steps behind their wealthier counterparts. 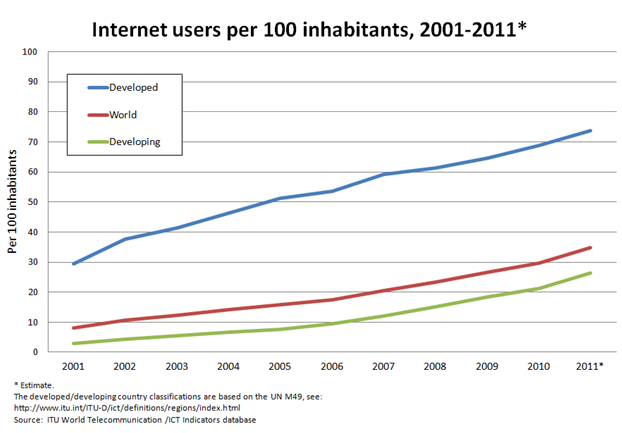 Since its inception in 2001 the WiderNet Project, a nonprofit service organization at the University of Iowa, has been working to bridge this Internet (and information) usage gap. WiderNet Project Director Cliff Missen and his colleagues developed the eGranary Digital Library, a four-terabyte hard drive filled with over 30 million educational resources, to serve third-world students and instructors.

The idea was inspired by necessity when Missen was teaching at a Nigerian university as a Fulbright Scholar in 1999. As he explained:

"We had computers, we had a network, but the Internet connection only worked once a week and even then it was too slow to reliably check email. We first started sending Web sites on CD-ROMs, but over the years the demand and the potential kept pushing us to grow the service."

Today's eGranary, also known as "The Internet in a Box," contains thousands of copied websites, taken with permission from sources such as MIT's OpenCourseWare, the Khan Academy, and Wikipedia. This off-line information store allows any college or university to add these resources to its collection. A student in East Africa or rural India can take a full MIT course on software development without accessing the Internet, for example. The digital library can be shared over a wireless or wired local area network of local computers (figure 2) to give an entire campus access to the eGranary's resources. In addition, the eGranary contains tools to upload local resources, with software that allows students or teachers to create their own websites and lesson plans, share their projects, and store university publications.

The eGranary has been installed in more than 500 institutions around the world, touching the lives of more than two million people. Subscribers pay $1,800 to cover the basic production and support costs, while the development of new content and features has been born by foundations and corporations such as The Hewlett Foundation, the U.S. Agency for International Development, and the Intel Corporation. (A blog entry from Free the Children talks about an Intel-sponsored implementation.)

Mohit Argwal of Engineers Without Borders observed the following regarding an eGranary installation in Ghana:

"Installation of the eGranary at the EP Basic School in Ashaiman, Ghana, has expanded the boundaries of the traditional libraries and encouraged students to go beyond static texts and explore the rich digital environment provided by eGranary."

A news story from the University of South Carolina talks about conditions at the University of Mkar, in Nigeria. The eGranary Digital Library is the only electronic resource in the university's library, according to USC's Duncan Alford, associate dean of the School of Law and director of the law library.

The eGranary looks like the Internet (figure 3), but requires no connection to work. On a LAN it runs at speeds much faster than through a broadband connection. The interface allows users to search resources as if they were using a normal search engine. 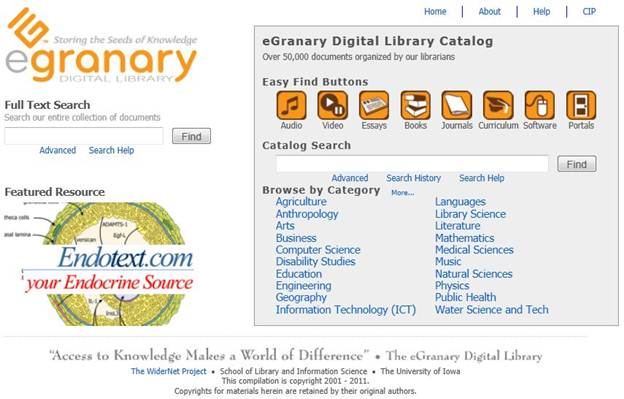 Stephen Akintunde at the University of Jos, Nigeria, noted:

"We've had problems with bandwidth cost, paying about $6,000 monthly.... We've had to put other expenses on hold in order to pay for bandwidth that is not very reliable. So, the eGranary … has been a great asset for us. We have it up and running on our intranet with no bandwidth cost and it's accessible at the speed of lightning! What better motivation for academics!"

The eGranary in Zambian Medical Schools

The eGranary has had a significant impact on medical schools in Zambia since 2009. Internet penetration in Zambia has risen steadily since 2000, but remains at a meager 6.82 percent of the population (figure 4) as of 2010. The lack of Internet availability, combined with several economic and social uncertainties, makes the region a difficult place for institutions to provide Internet access to pupils.

Figure 4. Zambia's Internet user percentage, one of the lowest in the world

In a project that began in 2008 with the Sparkman Center for Global Health at the University of Alabama, Birmingham, WiderNet deployed 44 eGranary Digital Libraries in Zambia that were specifically tailored for Zambian medical schools, with information categorized into custom "portals" that made it easy for students and faculty to find and use course materials. Teachers could upload their own course materials for their students, very few of whom had acceptable textbooks. The success of the project brought the eGranary to the attention of Canadian nurses working at a nursing school in rural Zambia, and early this year 23 more eGranaries were ordered for Zambian nursing schools, with new portals focused on training for nurses.

"In terms of work, the best part is seeing people's eyes light up when they see how fast the eGranary is and they realize what all they can do with it, basically the 'aha moment'," said Heather Lee, program coordinator at the Sparkman Center. Lee trained dozens of educators and librarians in Zambia to use the eGranary in health education.

The eGranary for Student and Human Rights Groups

The affordability of the digital library makes it an appropriate resource for large institutions and small groups alike. The Global Disability Rights Library, a custom collection tailored to disabled persons and advocacy groups, has been deployed to over 60 organizations in developing nations. The specialized collection, sponsored by the U.S. Agency for International Development, has thousands of resources for those with disabilities. Most importantly, it includes information on international laws that protect people with disabilities and how users can make sure those laws are upheld in the region where they live.

The most popular feature of the GDRL is a section that includes advice from experts around the world on providing education to persons with disabilities. It has a large collection of software to make computers and software more accessible to all users. The eGranary provides sources such these and documents from the UN and other international organizations, which are vital for groups in oppressive environments to maintain a knowledgeable voice.

The eGranary for Rural Libraries

Free access to millions of documents is a capability few libraries in Sub-Saharan Africa and other developing areas can offer. The majority of countries with the lowest literacy rates lie in Sub-Saharan Africa: Mali, Niger, and Ethiopia all have literacy rates below 30 percent. The cost of the eGranary and the equipment required to use it (a small computer lab with a local network) make it a possible solution for information-starved rural communities.

In May 2012 an eGranary was installed in the island town of Lamu, Kenya — a village that has very little technology and a modest library with few digital resources. According to Fatma Busaidy, coordinator at the library in Lamu, the eGranary has proven useful to entrepreneurs and students who previously had little up-to-date information relevant to their work. Busaidy herself continues to study: "For me, I also study [the eGranary] well so to have a quick, educated answer for my members' questions."

Since 2006 the WiderNet Project has been working with prison educators in the U.S. to identify how off-line information stores can serve the incarcerated. Most states do not allow those in the corrections environment to access the Internet, yet states want to provide educational opportunities because research has shown that better educated offenders are less likely to re-offend. "With exposure to education, postsecondary in particular, statistics show that recidivism rates decrease from 60 to 15 percent," said Heather Erwin, coordinator of the Corrections Off-line Education Platform, citing a study from the Institute of Higher Education Policy. "The eGranary is a perfect solution for facilities because it provides many important Internet resources without the risk of giving inmates access to the web."

Affordability of education is a global issue. In the United States, students feel it as they return to school, apply for loans, and prepare for the long term. In the third world, the problem is urgent and the sacrifices dire. Most universities there cannot afford modern technology and information resources, and rural schools and libraries have few options for equipping their youth with sufficient knowledge to participate fully in the modern workforce. Whether in a larger institution, such as a public university or nursing school, or a small rural library, the eGranary Digital Library serves as an affordable, adaptable, and sustainable solution for information-poor students and educators without reliable Internet access.

© 2012 Nick Patten. The text of this EDUCAUSE Review Online article (September/October 2012) is licensed under the Creative Commons Attribution 3.0 Unported License.