Education is clearly in the midst of a dramatic transformation. From the incorporation of mobile devices with their "anywhere, anytime" access to information to the rapidly growing presence of tablet devices and digital books, clear challenges are being raised to existing models of how we think, learn, teach, and make decisions. The future seems both clear and imminent — a future in which students carry course texts and personal media in a "digital backpack" that is light, fun to use, enjoyable for reading, and always connected to information and friends. However, visions of media-rich, cost-efficient educational texts available on a variety of digital devices seem frustratingly slow to solidify due to factors ranging from cost at scale to a failure to effectively exploit the pedagogical potential of these devices.

As an increasing number of states and educational institutions declare their commitment to moving to digital-only platforms for educational texts, it seems wise to consider a fundamental question about the future of educational materials, in terms of both content and delivery:

Why is a "book" the best metaphor for envisioning this future?

Much like the transition of music media from vinyl to CD to highly mobile media devices, it seems reasonable to ask what potentials emerging technologies offer for educational content. To this point, the majority of digital text offerings appear to be relatively simplistic migrations of print content to digital platforms. Instead of merely digitizing textbooks, it seems wise to reimagine the future as one in which educational institutions pursue the full and unique potentials, or affordances, of the mobile digital medium for learning. After all, students bring expectations of interactivity and connectedness when they use any type of digital device, and when they only get a PDF with the ability to highlight and add notes, their expectations are not met. Hence, students continue to resist switching from paper textbooks to digital.

At the recent Connected Summit conference on the campus of Abilene Christian University (ACU), research presentations from a variety of educational institutions provided convincing evidence that incorporating mobility into higher education successfully engages students and prompts faculty innovation.1 Across these projects, however, only neutral or modest positive impacts were seen on traditional measures of academic outcome. This finding calls into question the appropriate measurement strategies for learning outcomes (immediate measures of content recall and course grades versus delayed measures of critical thinking, efficient use of available resources, improved decision-making, and functional team performance). It also highlights the need for innovative reconceptualizations for delivering educational content.

Beginning in 2008, GYLO, an Austin, TX-based educational software company, spent six months categorizing every educational app then available in the iTunes Store. They found that the large majority of apps produced and marketed for educational use lacked overall consistency with multimedia learning principles2 and modern learning research.3 In general terms, these apps failed to effectively and robustly exploit the affordances of the iPhone for pedagogical potential. Specifically, the touchscreen potential for education was completely underutilized.

With this understanding, the GYLO instructional design team envisioned an app with all the content, assessments, and tools a student would need for an Introductory Statistics class, including lessons, quizzes with feedback, flashcards, calculators, simulations, glossaries, formula lists, and graphic organizers/decision trees. Over a year's worth of development resulted in the GYLO Mobile Learning Platform and the company's first app, Statistics 1 (see Figure 1), an iOS app designed by educational psychologists. 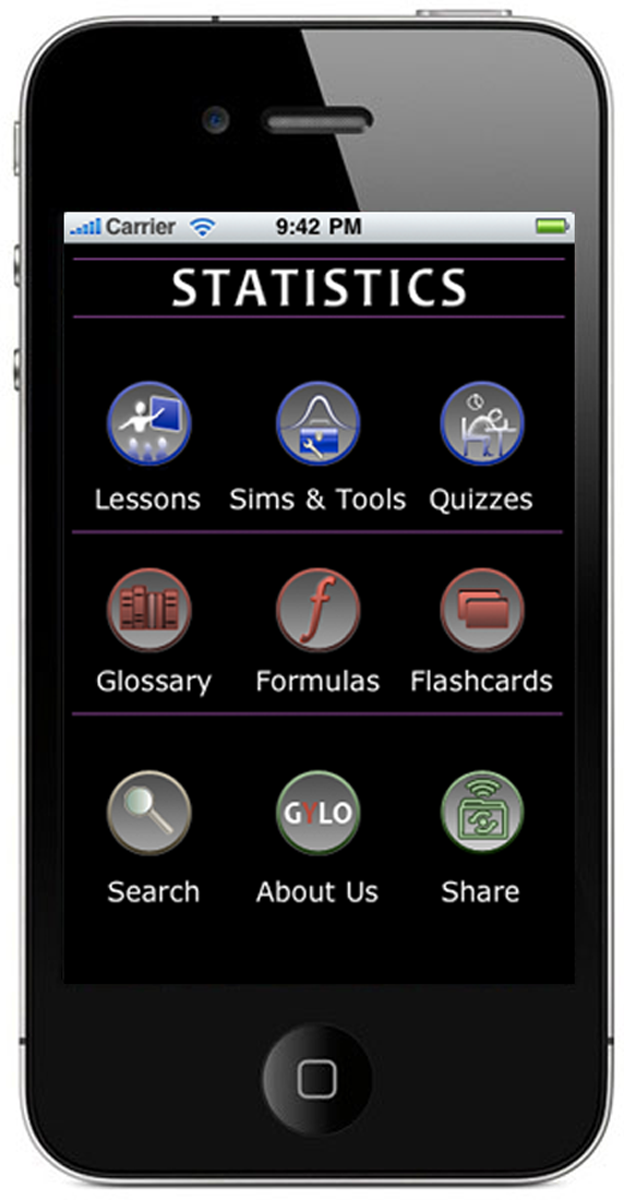 ACU and GYLO partnered to investigate factors and relationships associated with using mobile devices as supplemental tools for teaching statistics in higher education. The Statistics 1 app has been used in multiple ACU-GYLO research studies since 2009, beginning with testing in undergraduate statistics courses at ACU over the fall 2009, spring 2010, and fall 2010 semesters. In each case, all students enrolled had either an iPhone or iPod touch provided through ACU's Mobile Learning Initiative.

The fall 2009 pilot study examined the use of Statistics 1 in terms of the following four primary objectives:

Three online surveys were administered to all 36 students (12 males, 24 females) enrolled in the course; however, 6 students chose to not complete all surveys. Results from the online surveys conducted across the semester showed that students perceived the app's navigation system to be intuitive (see Figure 1). After students used the app for two weeks, all felt the app would benefit them as the semester progressed, specifying the "pedagogical design" and "new learning experience" as leading reasons. When asked about study habits, many of these students reported having consistent study patterns throughout the semester. One student stated:

"I did not read the actual textbook very much because it wasn't that helpful…mainly just used app and professors notes/lecture to learn and study."

The majority of students (24 of the 30 responding) reported a heightened ease of and motivation to study due to the increased mobility and convenience (quick access to information and easier to carry around than the text) and mentioned going through quiz questions "whenever" they chose.

The majority of students (18 of the 25 surveyed) reported using the Statistics 1 app at times and in places not traditionally considered "formal learning spaces" such as downtime at work, on the bus, or when their schedule placed restraints on their formal study time (such as "When I don't actually have time to sit and study"). At the end of the semester, the same students perceived their general understanding of statistics concepts to be greater than if they had not used the app (p < .01). Three-fourths of students (19 of the 25 surveyed) reported they experienced increased engagement in the course as a result of using the app on their mobile device. Significant perceived impacts were observed for a number of components of student engagement, including items measuring increases in student interest in course content (p < .01), attention during class (p < .01), and interaction with the course instructor (p < .05). Figure 2 shows students' perceptions of the Statistics 1 app. 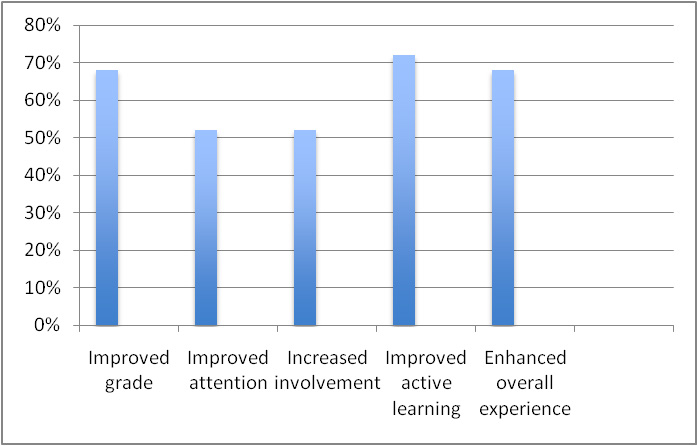 A pattern was also identified for students use of the app (continuous study, test-review only, and reference-only) and grades (90-100, 80-89.9, and 70-79.9). Students who continuously used the app for studying had better grades compared to students who used the app less for continuously studying. Observing that students who study more earn better grades is not surprising, of course, and without the inclusion of a control group it is impossible to determine the nature of any cause-and-effect relationship. Figure 3 illustrates the relationships observed. 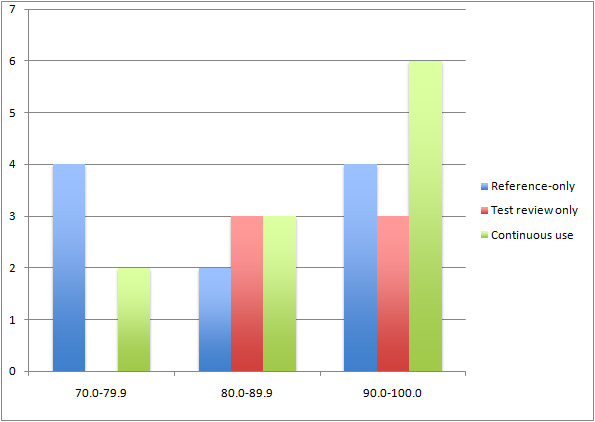 In the fall 2010 study, ACU and GYLO focused on examining form factor differences in how students reported using the Statistics 1 app on mobile devices (iPhone or iPod touch) versus the iPad. Students enrolled in a psychology statistics course used the iPhone or iPod touch app for the full semester and the iPad app for the final four weeks. Of the 41 enrolled students, 36 responded to an online survey asking for them to compare their experience on the two devices. Results from this comparison found that 26 of the 34 students to this question expressed a preference for using the iPad more for studying, with 13 students specifically attributing the difference to the larger screen size. Conversely, students found the portability of the smaller devices, the iPhone or iPod touch, important because they always had the device with them. The iPad, like a laptop, was seen as convenient but less mobile than the iPhone/iPod touch, which fit into a pocket.

In terms of form factor comparisons for app use, students preferred using the iPad over the iPhone/iPod touch for:

The research team concluded that the instructional design process for building digital curricula for mobile devices must consider not only the paper-to-digital transformation but also the form factor of devices and how students use devices of different sizes.

ACU and GYLO plan to continue working together to develop and evaluate innovative platforms for learning in terms of activities both in and outside the classroom. For example, additional investigations of differences in user attitudes and use patterns according to devices employed are needed to confirm, dispute, and expand on the initial findings from the fall 2010 study. Also, direct comparisons of reading and learning efficiencies across reading activities on tablet and other digital platforms are needed, especially as these allow for comparison with what is already known about reading and learning with paper texts. As these studies are conducted, we need to remember that digital "books" with print-copy content are clearly not the destination, just one step along the way. The fragmentations across e-texts, print books, iOS and other platform apps, and cloud-based resources remain challenging. Right now, the cohesive, interactive platform we imagine for the future remains largely unrealized. In fact, we may soon find that a more descriptive and innovative metaphor than "digital textbook" facilitates creative thinking and development in a more helpful and instructive manner.

Mobility offers the ability to engage learners of all ages with anywhere, anytime access. This potential represents both the greatest challenge and the most significant opportunity facing educators today. The presence of socially connected, multitasking students in the classroom urges educators to move away from an "information-dissemination" role toward a more interactive, collaborative process in which they guide learners in the skill of evaluating and assessing available information. Similarly, the social networking habits of today's students appear to represent a tremendous unrealized opportunity, or scaffolding, for academic activities and higher-order learning.

The future of the educational text faces this same challenge — creating innovative and interactive learning activities that fully engage learners in experiences they perceive to be both interesting and relevant to their interests and future. This is an exciting dilemma. The resulting implementation just might not be called a book.

© 2011 Michael Mayrath, Priya Nihalani, and Scott Perkins. The text of this EQ article is licensed under the Creative Commons Attribution 3.0 license.