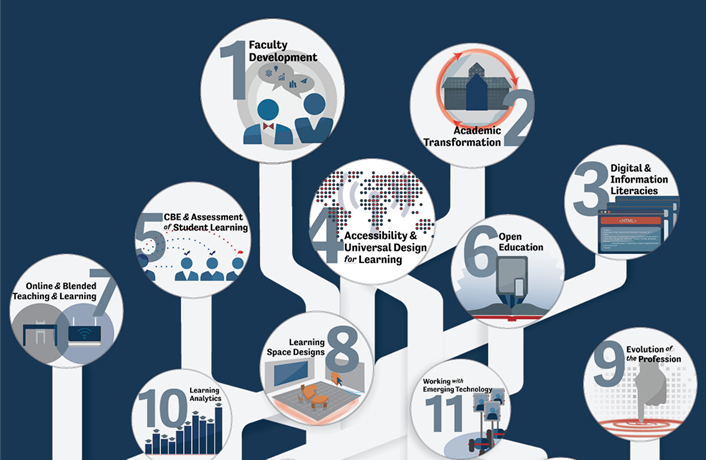 Since 2011, EDUCAUSE Learning Initiative (ELI) has been tracking key issues for higher education teaching and learning. We solicit input from the full breadth of the teaching and learning community, including faculty members, students, and professionals from the IT organization, the center for teaching and learning, the library, and the dean’s and provost’s offices. We received a record number of responses (935) for our 2017 survey and we invite you to view the downloadable infographic and resources related to the top 16 key issues.

From a longitudinal perspective, most of the issues do not shift in rank very radically from year to year. As an example, both faculty development and academic transformation have been ranked either #1 or #2 since 2015. For 2017, they are first and second, respectively. But this year, we witnessed some more dramatic shifts elsewhere in the rankings:

Institutions of higher education often perceive their challenges and circumstances as being unique to their institutional type or Carnegie classification. Our findings for 2017 told a different story, as the different institutional types exhibited several commonalities, especially among the top seven issues.

Faculty Development and Academic Transformation ranked first and second across all institutional types except for Associates, which had Accessibility/UDL as first and Baccalaureates who had Digital and Information Literacies as second. Interestingly, Online and Blended Learning ranked in the top five for Doctorates only, and was a lower priority for the rest, indicating an increased interest from that institutional type. Competency-Based Education (CBE) seems to be gaining some traction, as it appears in the top five across all classifications, except for the Baccalaureates, which ranked it 13th. Finally, Open Education appeared in the top six across all institutional types, except for the Doctorates, which ranked it ninth.

It’s no surprise that faculty development has consistently ranked so highly across all organizations, as it is a key component of successfully deploying any teaching and learning innovation. While always present in the top 20 issues, Digital and Information Literacies have risen slowly but consistently across all institutional types. These literacies have become a critical skill that learners must develop in order to be professionally viable and self-supporting lifelong learners. First appearing as a key issues in 2015, academic transformation has quickly risen to the top. In previous years, we saw components of academic transformation appearing throughout the key issues, such as evaluating technology-based innovations and working with emerging technologies, but this key issue speaks to broader change and reimagining teaching and learning. Indeed, academic transformation itself is broader than the teaching and learning community, and includes working across higher education divisions — sometimes in collaboration with other institutions — to support and address strategic goals.

ELI conducts the annual Key Issues survey and shares the results broadly with the teaching and learning community so that higher education professionals may work with a global awareness across these issues. The key issues function as navigation points for the community at large, while also informing institutions’ future directions. A broad context is valuable for framing our day-to-day work and activities, and knowing the community’s top issues enables all of us to prioritize and sync our work against a comprehensive picture. The relative priority of these areas may correspond with institutional investments such as allocation of time, staff, or funds, and demonstrate where the community’s opportunities and challenges reside. Our professional work should be social and collaborative — and by sharing this work, along with insights and best practices, we labor collectively to promote a more effective higher education teaching and learning environment.

Malcolm Brown is director of the EDUCAUSE Learning Initiative.